After Beskidy Trophy I travelled south and arrives in Slovenia a few hours later. I biked around on my favorite trails in the Idrija area for the next five days. Then further south into Croatia where my good pal Marko Glusac had told me of a race happening on Saturday.
It was an unusual type of race, a hill-climb on mountain bike. It starts in the town Senj, right next to the harbour, at sea-level. And then we go uphill and climb the mountain called Zavizan which is 1594 meters tall. The finish is at a lodge at the top of the mountain. Strava said that I had climbed a total of 1712 meters during the race. The length of the track is 38 kilometers.

The race has two categories: Under 45 years old and 45 and older and there were 100+ starters.
It was a really really hot day. My garmin data gives an average temperature of 29 degrees C however at the start it was 39 degrees C. Going uphill means very little draft from the speed. There were three water posts and at each I just poured a bottle of water over my head. I actually didn't need to fill my 900ml bottle at any point.
When I first got the race information I was thinking about a finish time of about 1.5 hours, which of course is silly. I took just two gels in case, I didn't think I'd need them for such a short race. I met up with Marko before the race and he said that the quickest time ever recorded was just under 2 hours. I was glad I brought the gels!
My other Croatian friend, Danijel Turcic, was also there. He's a hill climb specialist so I was very curious about how I was going to perform compared to him. We were not racing in the same category however so there was no pressure. Marko said he was unsure of his recovery as he had raced the Croatian national time trial just the day before.
The race started and the pace was quite high to begin with. In races like these, with long climbs, I always race my power meter, not the other competitors. Drafting is pretty pointless as the climb is so long and there are so few flat spots. Going too hard at the start of a 2 hour climb will kill you. After just a few kilometers  I noticed 5 riders speeding away. Looking down at my power meter I saw that I was doing about 380W and so I decided to let them go. Danijel also came around shortly after and I let him go as well. He was a bit behind the leading group of riders and going solo. I was solo as well I noticed after looking behind.
After about 10k I came to a fork in the road with a water posting on the right, just at the fork. I was a bit confused because the water post was on the gravel road forking away and the main paved road continued ahead and so I stuck to it as I couldn't see any markings. The people at the water post just looked at me and so I asked them: "Am I going the right way?". The answer was: "Well, you can go that way also, it'll just be a bit longer. Both roads will get you to the finish". I realized they were joking and that I was on the wrong path. I made a u-turn and got on the gravel road instead. I found the behaviour of the officials very strange. Had I not asked they may never have had told me I was going the wrong way. At about this point I also noticed that there were not the usual kind of markins with signs or banners but just orange arrows painted on the road where one was supposed to turn. I didn't see anything about that in the race info.
Making the u-turn a group behind me had almost caught up and I had a brief thought about if I was going to let them join to get some drafting help. I decided against it and went ahead at full speed. At this point my average power was at about 320W.
A lot of solo riding continued with the track going mostly uphill on gravel roads but there were also shorter flat sections and even some downhill. At times I could glimpse Danijel far ahead of me. The group that I had seen behind where I made the bad turn I never saw again. I had a bit of a dip at this point and after 20k my average power had dropped to 290W. The heat was terrible but as we got higher up on the mountain there were more trees at the side of the road at least providing some shade. The temperature also gradually dropped just because of the altitude.
Then at 30k I took my second gel, got a big power surge from the energy, and also started to see more of Danijels back. I got the feeling that I was slowly catching him. This gave me another burst of positive energy and I felt really strong all of a sudden. I upped my power to 340-360W and it took just about a kilometer to catch Danijel.
I continued past him but Danijel upped his pace and took my wheel. This continued to about 1km before the finish when he finally let go and I was able to cross the finish line solo after the last part which was really really steep.
I was the sixth rider across the line and third in my category.
Average power at the end turned out to be 289W. 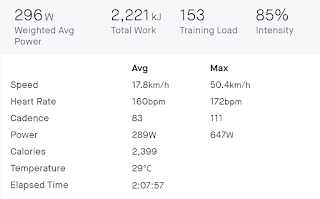 Posted by Alexander Lapajne at 18:12