Six-day cold and some Cricket Racing

After a six-day cold with no training I was feeling better and back at work.  The long period without training had left me feeling a bit stressed out though (not to mention restless). An important race coming up on Saturday (Bockstensturen) and the National XCM Championships next week.

The best would be to go for an intensive session already today, on my first well-day, and then take it a bit easier the other two days before the race. But it's a bit risky training on the first day after a cold.

I did have a nice opportunity for an intense session as the local "Wednesday Sprint" group were having their annual  Cricket Races. This is a race that takes place on grass, on a short course of perhaps one kilometer. You race between three markers. On each lap the last rider gets eliminated. These races tend to be super intense as you go all-out throughout the race. Going all-out also may be bad for my post-cold body. So I had myself a dilemma.

I decided to go for a slow ride and join the Wednesday Sprint group once I got to their Cricket Race and then just watch as they were racing. However, upon getting to the event the racer in me was awoken. And yes, I did end up racing. Three heats all in all and I finished first, second, first. Heart rate was predictibly through the roof peaking at 192.

Let's hope this wasn't a mistake... 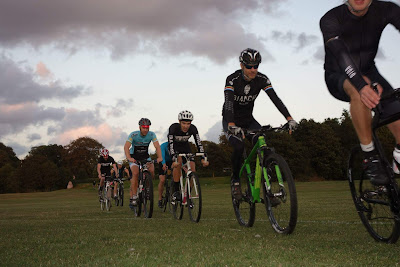 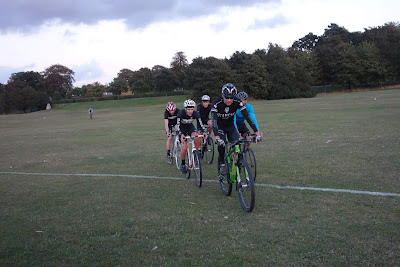 Posted by Alexander Lapajne at 09:09