Bockstensturen is the longest of the races in the Swedish Marathon Cup (Långloppscupen) at 100km. It's also traditionally one of the muddiest mostly because the terrain often doesn't quite dry up and is also very sensetive to rain. This is WITHOUT it raining. This year, the prognoses was for rain during the entire race.
The race is really a three part affair:
1. The start is at a castle in the town of Varberg. You first have a few tight turns getting out of town, followed by a few roundabouts, the asfalt road for about 10km. After this you move onto open gravel roads (double-track). If it's been raining this part is full of puddles and mud. Accidents do happen here. Also some parts have big stones and can cause punctures (I've had this happen to me in 2013).
2. After 16km you come into the forrest and it all starts with a big climb. Follows is a mix of gravel road, single track and quite a lot of climbing. A lot of it quite steep. The latter bit of the forrest ride has fewer climbs compared to the first. So most of the climbing is done up until perhaps halfway through the race. This whole section is also where you get all the mud, puddles and slippery stones and roots. There are some challenging downhills, all depending on how muddy it is.
3. At about 75km you leave the forrest area and come out into fields and gravel roads. It's mostly gravel roads but some parts are over soggy fields which take a lot of energy. Towards the end, when you're approaching the finish area, you follow the coast line on single track. This is perhaps the most fun part of the race,  but you're usually too tired to enjoy it.

Well, what can I say? Everything was going 'ok' (not great, but 'ok') until at about 60km. At that point I got a right leg cramp where I had to stop but it passed quickly. Unfortunately I lost my group there (a good one) and had to struggle on by my own. But the leg cramp wasn't a disaster however a few kilometers after this all energy left my body and I started struggling. My heart rate got lower and lower and I felt worse and worse. Groups caught up with me, I managed to follow them for a short while, and then I had to let go. The last 5-10km were a total disaster. I have not felt this bad in a race ever before. It's really best illustrated by my pulse curve:

I was told by friends that I was in fact in sixth place when this happened. No too shabby. I strongly suspect that this has something to do with my cold which didn't pass until a few days before the race. I tried taking it easy after the cold, appart from the first day where I did the Cricket Race. Perhaps that was a mistake,

What else is there to say? Well, it was feeling quite ok up to about 60km. One of the elite guys came up from behind (number 24), a talkative and quick guy. He had some good technical skills. I noticed that he took all the slippery and muddy descents really quickly and that I couldn't let him go there and then sprint to catch up on the gravel roads (which I did at first) so I started descending at his pace. This was quite exciting and somewhat dangerous. But I managed.

Oh yeah, and it was a mudfest. The muddiest and wettest race I've ever run. 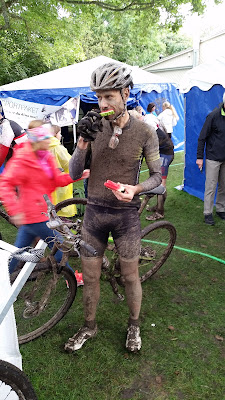 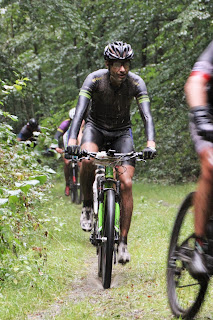 Posted by Alexander Lapajne at 11:22