The venue for this year's marathon championships was Ånneboda. This is a location that was new to me and terrain that I have never ridden before. I had heard that it is quite hilly and that especially the last part of the race is really tough. The race is 75km long and has a loooong starting gravel road climb.
Leading up to this race I had a rather bad period in my training. The cold that I had 2 weeks ago had passed but my body seemed not to have quite recovered. I had a really bad race the previous weekend at Bockstensturen which had me worried. Also, when I tried to do an intense training session last Tuesday I was not able to perform at high intensity for more than a few minuts. I ended up aborting that session. So I really had no expectations for this race, I actually told my racing partner, Jessica, that if I didn't feel well during the starting hill then I would abort the race.

As this was the National Championships we started in groups in our age categories. So first the two elite categories (men and women), then M30, then us in M40, and so on...

The race started with a long gravel road climb of about 5 minutes. For me the first few meters felt really terrible and I was quickly dropped to the back of our starting group. However after just a few hundred meters I started advancing through the field and at the top I had passed Rolf Svensson and caught up with Mikael Johansson, two of the giants in the M40 category and both usually finish in the top-3. Just after the summit of the climb I also caught up with Nellie Larsson who had started at an amazing pace.

Just after the climb there was a section of quick gravel road where I tried to advance a bit further up the groups. Once I was in the same group as Jerry Olsson and Mikael Johansson I relaxed and tried to conserve some energy. However it seemed that the pace got a bit slower. This led to a lot of riders catching up from behind and the group grew in size to about 30-40 riders (from all different classes). I ended up blocked in at the middle of the pack and even though I tried to make my way to the front it was pretty much impossible as we were packed tight and the speed was really high. I saw that Jerry had a nice position close to the head of the group.

As I had very little previous information about this race (only the elevation profile) I didn't know when the first stretch of gravel road would turn onto single track. Typically you want to be at the front of a group when you move into single track because when riders try to squeeze together there's the risk of queues. This is exactly what happened now as our gravel road turned into tight single track going into the forest. Unfortunately I was way too far back in the field and it got so tight that people had to get off their bikes.

Once into the single track things did speed up but I never saw Jerry again. I picked up the pace to make sure that I would not be at the back of the pack in the next section and so I moved up the field. Our group was between 5 riders and up to 20 as during the gravel sections people would catch up from behind. However after about halfway through the race our group did thin and there were no more than five of us, one of the riders being Mikael Johansson.

Mikael Johansson went away at the head of our group and I was not able to follow. Also, I felt it was a bit more strategic to stay with my group of four riders. I could see Mikael up ahead and he was on his own so I thought that he would have a hard time. Our group had a good pace going as gravel road switched to single track, back to gravel road and so on. There were a lot of really fun downhill sections with lots of roots and rocks where my wonderful Superfly could do what it's best at: eat up rough terrain at amazing speed.

I knew that with about 20km left the race would start to climb gradually upward and things would get tough. And at about the 20km sign I started to get really tired. Not just the 'normal' kind of tired but a deeper kind, something that I felt had to be related to my poor health in the last few weeks. At this point I had to let my group go during a long climb and I saw the four riders move ahead of me. However the gravel road climb turned into bumpy and rough single track and, to my surprise, I was able to catch up again.

I stayed with the group until there was 15km left when I finally had to let the go again and for good this time. I think that I was probably in fourth place at this point in the race. Other riders caught up with me but I was too tired to be able to follow during the climbs and saw them disappear away on the gravel road climbs.

With 5km left I found some energy and upped the pace and I was able to actually catch up and overtake one of the bikers who had previosuly overtaken me.

I crossed the finish line in 8th place. Something which I, under the circumstances, am very pleased with.

Jerry finished in second place in M30 and Martin also came second in M50. Great results from those two guys. Nellie finished fourth in the Elite category which is also a great result. 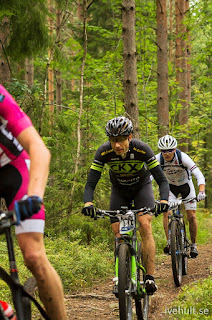 Posted by Alexander Lapajne at 09:52