After spending the whole working week in London teaching a course and therefor limited training (a few runs on the hotel gym exercise bike, boring) I needed some intense biking. XCup in Käglinge provided the venue. It's a tight and technical course. The race setup is 60 minuter + the lap, which in this case meant 4 laps. Form had not been great lately so I had no high hopes.

The start and first couple of laps went well. I was battling it out with Christian Skoglund and Rolf Svensson and hanging on. But when the third lap came round all the energy just left my body. Martin Wenhov caught up from behind and flew by. I was actually thinking about calling it quits after the third lap but decided that I needed this, as an intense training session, if nothing else. The funny thing was that during the fourth lap I started gaining on Martin and passed him. However another young Danish rider managed to pass us both. Looking at the lap times my third lap was the slowest one by far. Weird - Usually when I get tires towards the end of a race the laps just get slower. Also Strava said that I set a personal best on the lap (I've ridden this track many times during the years) so something was working ok. Just the strange tiredness that suddenly pops up... This has happened a few times during the last few races. 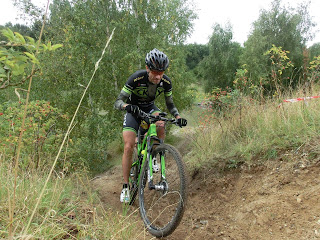 Posted by Alexander Lapajne at 19:40