The fourth race of this cup took place in cold conditions. The temperature was around freezing. The terrain was a mix of mostly single track and some gravel roads. The ground was mostly covered with snow, ice and slush but some parts were also bare. The trails were quite technical and the slippery conditions made them difficult.

I got off to a good start. Stayed around 5-6th place (overall). Another rider came up from behind whose wheel I was able to take early on in the race. We stayed together and also caught up with and passed one of the guys dropping back from the front. I lapped after 3 laps in second place in M40 (fifth overall) and with only 30 seconds left on the clock I went out on a fourth lap. Here, however, I started getting seriously tired and had to let some riders pass.

Trail conditions were difficult with some really slippery parts and some which had quite good traction. It was hard to determine which was which though. I had one minor fall.

Tire pressure, even though I checked it before the race, somehow felt way too high. I was being bounced around a lot and the bike did not feel compliant. It may have something to do with the fact that going from Thailand a few days ago to Denmark, with a temperature difference of about 40 degrees, has made me a bit stiff.

Judging by the first three laps my form feels really good. The weight loss from Thailand was evident in the climbs where I had really good speed. Heart rate during the race was really high (good!). The lack of energy on the last lap may be from the fact that my body is probably over-trained since all the biking in Thailand. 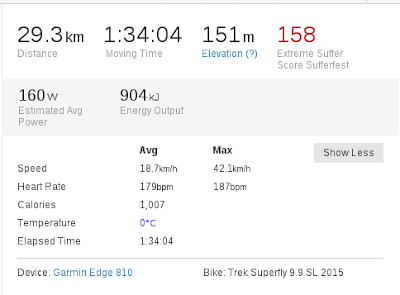