There was this XCO race, Varberg MTB Meeting, not too far away (a 2 hour ride). Sandra and I decided to try it out. We do very few XCO races. This one is part of a a cup: Västgötacupen. The other races are quite far away and we may not do any of the other ones. But it's really fun to add variation to your life.

Now the reason we don't do much XCO racing:
1. It's usually a long drive away and the races are typically 1 hour long.
2. They're technical in nature with jumps and stuff. And that's not my strong suit.

It's always a challange for me to try as many A-lines as possible. In this particular race there were four places where you could chose. Three of these were serious jumps. Jumping isn't my thing. I didn't do the A-line in those places. The fourth place was a Rock Garden. Here I did pick the A-line. I'm very proud of myself for that.

Even where there are not sepparate lines with varying difficulty an XCO race can be dangerous. This was also shown in this race where there were several crashes, one leading to a rider being picked up be an ambulance. He was lying on the actual race track and they didn't dare move him due to the risk of a spinal injury. It was quite scary to see this while we (slowly) rode past.

For my class, M40, this particular race was 6 laps of a 3km course. The course was ALL single track. 4 sections with sepparate lines. Going either uphill or downhill in most places. Not steep, but few flat sections.

The starts in XCO races are always really chaotic as people now that the race is short and so getting a good start is vital. The start loop in this race was really short and we were into single track almost immedialtely. I was probably somewhere in the middle of the field at this point. Mostly because I don't want to risk a crash, it's just not important enough for me.

I quickly started picking up positions and I advanced through out the race. I think I must've overtaken some 20 cyclists while not being overtaken myself a single time. It was a lot of fun. Sure, some of the guys in my class took the A-lines and gained ground on me there but I got them back in the climbs.

The finish was fun because on the last lap there was a guy on my wheel all the way through the lap and I was not able to shake him until the sprint.

After going over the finish line an official came running up to me and told me that my chip had not worked and that they had no officially registered time for me. This has happened before and in cases like this it's the officials duty to look at the rider's number plate and register the time when he crosses the line manually (by just writing it down). Somehow the officials of this race did not have this procedure down. So, at this time, I'm listed as DSQ in the result list. However, checking my Strava entry for the race, I can see that I came in at sixth place. We'll see how this develops. I've filed a complaint with the race organizers.

Slightly low tire pressure in the rear. It felt like the rear tire wanted to come off in the turns (the ones with good grip). I should go 0.1 bars higher 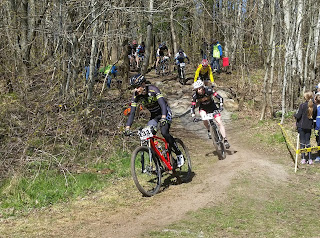 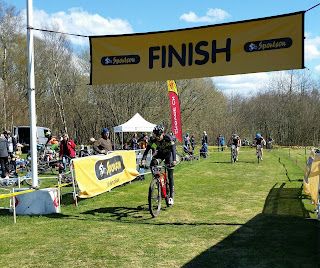