Fitnesslöbet is a marathon race early in the season which is really good as a build-up to the marathons that come later on in the spring and summer. It's a long race: 76km, on a tough track, and all the good Danish riders are there.

The race is over four laps of a course. The course is rather special as it's mostly gravel road for the first half and then the second half is all single track. But not only that: The last part is totally murderous as you cross the same small hill in three different directions. And after that there's another three steep climbs.

During this race I decided that I was going to improve my gel-intake process compared to previous races. I even went as far as to take my first gel just minutes before the start. A first for me.

As the race started I got a really good position close to the front and I was able to not exhert myself too much during the start loop on gravel road. When the course turned into single track I let go of the quick boys and settled back in a good group. Henrik Söeberg was there, so were Palle Jensen and Thomas Kyrum-Stein.

Quite early in the race I noticed that my body wasn't feeling 100% full of energy and power. In the short climbs I had to drop back a few meters each time and then take them back in the next flat section. I decided that if I was going to finish the race well I would have to be super tactical. Not a strong point of mine.

Henrik Söeberg went away at the end of the first lap and took one other guy with him. I decided not to try to follow. I stayed with our group which looked like it was some 20-30 cyclists strong. I was up among the first few all the time. this is a good position to be in as it avoids problems when lapping slower cyclists and you get a good view of the course.

I looked back every now and then and saw the the group was thinning. At the end of the second lap Palle and Thomas also went off the front. Again I held back decided that I was not in a good enough shape to take any chances.

When the third lap was nearing its second half and the single track was about to start I decided to make a strategic move: I knew that it was really important to have some good wheels to follow for the first half of the last lap, where all the gravel road sections are. But there was a real danger of losing those wheels when the climbing started on this third lap. So I went to the front of the group so that I could set the pace for the last half of the third lap, thereby making sure that I would be in a good position for the last lap.

This all worked out as planned. We lost a bunch of cyclists off the back and on the last lap there were only five of us left in the group. As expected I was getting real tired now and I was only able to hang on until the climbs of the second part of the last lap started, then I had to let them go. I managed to finish the last lap without anyone catching up from behind so my strategy worked.

I finished the race in ninth place. Happy that my strategy had worked and that I had done what I could with the resources that I had in hand. Perhaps less happy with placing worse than last year though.

The first race on the Fourstroke was a fact. The bike performed flawlessly. I'm really looking forward to racing this bike during the marathons for the rest of the year. 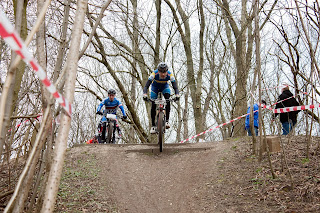 Posted by Alexander Lapajne at 12:28