XCup #1 - The art of racing on consecutive days

Today's race was the first one of this season's XCup. The whole cup takes place in southern Sweden and all of the races are within easy reach for me. Also most of my training pals participate in the cup it's really fun racing against your friends. The races are 60 minutes long + the lap.

This particular track is a lot of fun with some tight single track mixed in with sections of gravel road. Especially the first 'loop' is really twisty and tight and I've had problems there in the previous year's that I've raced this track.

As this was my second race on consecutive days (Varberg took place yesterday) I was very curious as to how much my body had been able to recover. I know that each consecutive day of racing lowers my heart rate a bit and so performance suffers slightly. As I knew at the start of this week that I was going to be racing both Saturday and Sunday I just had one intensive workout Wednesday morning. The rest of the week has been low intensity training.

Things started out very hectic with a bunch of us barrelling down the start loop which was a long gravel road. People were switching positions, advancing and being pushed back and it all seemed a bit chaotic. Luckilly everyone got out of it unscaved and we went into the first portion of single track in a bunch. I took the outside of the left turn into the single track and got a really good position somewhere around sixth place.

The pace that was set by the leading guys was totally manic. I hung on for the first half of the lap and then I let go. The front group was 5 riders; Johan M, Stefan L, Luke, Ola and Björn. I was in the second group with Jerry, Martin W, Stefan M, Kristian S and Erik Mattelin.

Erik seemed to be the quickest of us but he kept crashing, getting back on his bike, chasing us down, catching up and then crashing again.

After a while Jerry and Martin went to the front of our group and on each gravel road section they pulled HARD. I had either Jerry's or Martin's wheel and enjoyed being sucked along in the vacuum behind them.

The group stuck pretty much together with perhaps a rider or two going away on the tight first single track loop but he always got reeled in on the gravel road section. I had to fight quite hard not to get dropped as the pace quickened. A few times there was actually a gap of 10-20 meters between me and the group  but I managed to haul them in every time.

Going out on the last lap I was at the head of the group of a while. But as the end of the lap approached Jerry, Stefan and Martin went ahead and I was unable to follow them. Erik was behind me so I concentrated on keeping him behind. The last section before the end sprint on gravel road was over a rooty and slightly muddy section. I sprinted hard there and halfway to the finish line I looked behind and saw that Erik was a few meters back so I could relax and roll over the finish line in ninth place.

I really have to say that the BMC Fourstroke was an excellent weapon for this kind of terrain. This is exactly the kind of trails that you want a well setup full-suspenion bike. Raising the tire pressure by 0.1 bar was also the right decision. I didn't notice and of the rolling of the rear tire that I had in yesterday's race.

But now for the interesting part: How did the heart rate match up compared to yesterday? Two days of consecutive racing - What effect did it have. 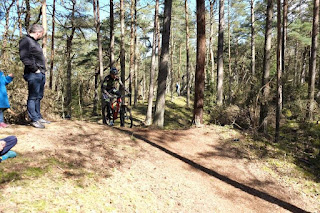 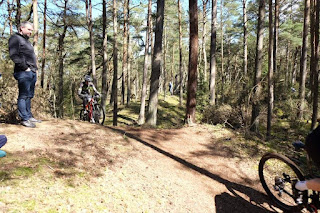 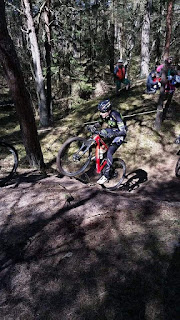 Posted by Alexander Lapajne at 12:47