Hotcup #1 - Premature sprinting is bad for you

The first race of this summer's Hotcup series is a long one: 2 hours plus the rest of the lap. A good length race to practice for the marathons of this summer. The lap was about 11km long so the race would be either 4 our 5 laps. This would end up being important... as you'll see below...

We have raced this track before and usually it's quick and flowy with lots of singletrack. This time it was a bit more tricky with some new blown-down trees and tricky detours around them.

Weather was... cold, but at least almost completely dry. I raced in short shorts and leg warmers! Very brave and unlike me.

The start went well and I was in the front group from the get-go. After a while we had a group of about 8-9 riders. My club-mates from CKX, Stefan Larsson and Björn Österberg, were in the group. Pace was HIGH.

About half-way through the lap the pace dropped a bit and I could stop hanging on for dear life. Well, at least I thought it dropped. A quick look at  my computer told me that what I felt as a drop in speed was showing up as a heartrate of 180. Ouch!

After lapping the first lap and started thinking about the long-term implications of this hard pace. Would I be able to last for two hours? "No way!" was the answer. Here I took inspiration from a blog entry from one of our best Swedish mtb-racers, Henrik Öijer, which I just read a day earlier. He wrote that sometimes it's better to drop down to the second group in order to finish the race strongly.

So I let the lead group go and dropped the pace a bit. I went from a 180+ pulse to 160+ and waited for someone, or some group, to catch up. I was very curious about who it would be. I knew I had some really strong riders behind me.

I was a bit surprised by how long it took before I started seeing a lone rider approching from the back. It took him a while to reach me too, which is a good thing because I was more likely to be able to hold his wheel. It turned out to be a Danish rider on a Cannondale Scalpel. Towards the end of the second lap I took his wheel and he pulled strongly, but not too strongly.

The Danish rider was very technical and lightning quick in some of the tricky descents. Also, there was one place where you could ever go over a log, or around it. Here he bunny-jumped over it. Very impressive! Myself, I went around.

We went around the entire third lap together with him pulling 90% of the time. When lapping and going out on the fourth lap the clock said something like 1h29minutes. So I judged that we would probably just do one more lap as the fourth lap should be a bit slower than the third.

When there was about a quarter left of the fourth lap suddenly two guys came up from behind. The lead rider was in a CK Ringen dress (my old club!) and the other guy I thought may be Henrik Söeberg. The CK Ringen guy was pulling hard. As they went past my Danish guy didn't try to take their wheel so on the next road section I sprinted in order to get on the wheel of the CK Ringen guy. I managed to do this and I could tell that my Danish guy also made it.

As we approached the last few km:s of the lap I looked at my clock: It read something like 1h52m racing time. I thought we would never go out for a fifth lap. So this was it: The sprint was approaching. I this point I had a bit of luck with some back-markers and managed to get ahead of the three other riders. So I decided to try a long sprint to finish first in the group. I pushed HARD.

Well, it worked as far as that I was the first to finish the lap. However the clock showed 1h58m14s. Yeah, that's right. I fifth lap was happening.

I had spent all my energy on the sprint and my spirits hit rock bottom. I watched rider after rider go past me. Martin Wehnhov passed quick. At some point halfway through the lap I messed up lapping a slower rider, got stock on his rear wheel, and flew over my handlebars. I got back up just to see Stefan Methander zip past. With no will or energy left in my body I slowly rode the last part of the lap finishing in 8th place. 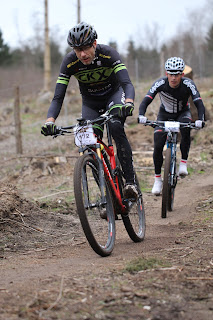 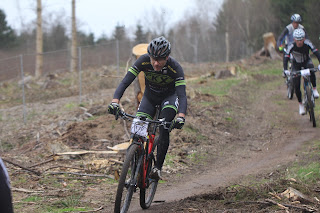 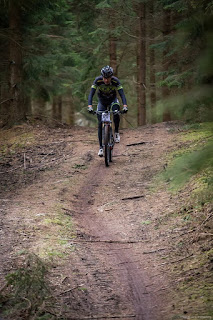 Posted by Alexander Lapajne at 11:51