The marathon championships is really my cup of tea: A long but quick (speed wise) mountain bike race with lots and lots of climbing (well, at least for Swedish conditions). I really prepared for this race: Four weeks before I went crazy with the training in an atempt to maximize my form for the race. The week that was four weeks before the race: 18 hours of training, the next week: 17 hours. Then 15th. Weight was coming down nicely too and I was at just over 71kg two weeks before the race aiming for 70kg... And the week of the race, Wednesday, A COLD!!!

I decided to optimize the weight of the bike for this race so: No spare tube; if I puncture the race is over anyway. Just some CO2 and my smallest multi-tool. One small water bottle on the bike: I'll pick a bigger one up later.

The groups start with 60 seconds between them so M40 will have its own start with no intereference from M30 or M50.

So I'm standing on the starting line on Sunday morning (during the night I'd been coughing up phlegm) and looking up at the long starting hill... it's LOOOONG. I tried to get the pulse going during the warmup but wasn't able to get it above 170.

The starter's gun booms and we're off... AND I GO TO THE FRONT! And start climbing at an easy pace... and no one tries to pass me until we start getting to the top. This is a completely different experience than I had at this same track last year where I was barely holding on at the start.

Under normal circumstances I might have thought about going to the front at this poing to go hard and see if I could get a good group going. However due to the facet that I didn't know what my shape was like (after the cold) I had decided that I needed to be smart and calculating.

Next we move to the gravel road start loop and still the pace is very relaxed. No one goes to the front and pulls hard. So we're all bundled up in a big bunch inspite of the long starting climb.

As the gravel road turns into single track I'm lucky because I'm in about 7th or 8th place and the transistion is easy without any bunching up or queuing. Last year I was at the back of a big group and had to come to a complete stop as we went into single track.

I start realiing how slow our pace is when Rolf Svensson and Martin Wenhov from M50 catch up after about 20km.

At this point of the race I do my best to stay near the front of the pack. So I'm in the top 6-7 riders all the time. The pace has picked up and is very quick now. After a while, when I look behind, I see that the group is down to perhaps 10-12 riders.

Single track and gravel roads continue to exchange. The next time I look behind there's seven of us: Martin W, Rolf S and five M40 racers.

Then Martin W and a M40 racer get dropped at a climb with perhaps 30km left to the finish. The pace is quick uphill and I'm struggling to hang on but I manage. At 12km to go there's a very long climb and I finally have to let go of Rolf and the three other M40 racers. I lose sight of a top-3 finish! I tried to hang on for so long that when I finally give up I'm very very very tired. I take it easy for a while and Björn Österberg, M30, who's having a terrible day, catches up from behind.

Björn helps pulling me along as I regain some energy. Unfortunately with just 50m to go Martin W and an M40 guy catch up from behind. I'm unable to answer the M40 guys sprint for the finish line. I cross the line in fifth place. 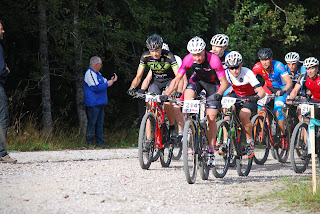 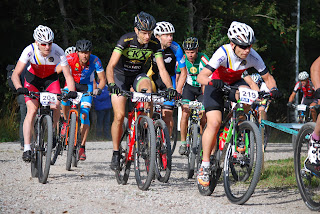 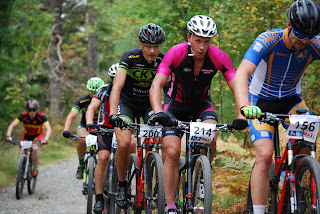 Posted by Alexander Lapajne at 22:22