The ninth and last race of the Swedish Marathon Cup (Långloppscupen) is Västgötaloppet. Every year this race has received criticism for being too easy and with too much gravel road. This year the organizers had promised more singletrack. This turned out to be true and the total race time was half an hour longer than last year. For a race which was already long at 78km, and with a lot of climbing (1200m), the extra singletrack meant a race time of around three hours. Hard stuff!

I like the way the race starts with a looong climb, first on asphalt, and then moving onto gravel road. This part went fast for me, as can be seen in Strava: I managed to hang onto the lead group over the whole climb. The first split time, some 8km into the race, has me in second place in M40 and 16th place overall.

However that was the best part of my race. I was in a group with, among others, Mattias Israelsson (who was having a great day), and hanging on at the back for dear life. I looked down at my bike computer and noticed that only about 30km of the race had passed. And I was already feeling very tired. I realized that this day was going to be about survival. I knew that I was probably in a good position, but I didn't know how long my legs were going to last.

I feel that our group of some 4-5 riders is going really quickly and I really have to fight hard to stay with them. But all the same we get caught from behind by another group of some 3-4 riders, Daniel Grass among them. Daniel joins the group and moves just in front of me, but as soon as we hit some singletrack he has a small crash. The crash splits the group in two parts, with me in the rear part. Mattias goes away with the first part of the group. Daniel quickly recovers and starts chasing the other riders but we never manage to catch up.

I continue to barely hang on to the Daniel group, staying mostly at the back. The singletack works really well for me and I'm so happy to be on the full-suspension BMC Fourstroke. On a day like this, a hardtail would have killed my legs. The downhill sections go better and better as I realize that I can't let myself brake or I'll lose the group.

Again, this group is going really quickly and yet we're caught up from behind by another group. This one contains Jerry, Rolf and Methander, among others. We are now quite a large group of 10+ riders. I'm becomming more and more exhausted.

With 8km left of the race where I'm in the red and barely able to think straight the guy in front of me has a leg cramp and while I try to go around him the rest of the group drifts away. I have no energy left to hunt them down. I try to keep the speed on my own for the last 8km and somehow manage to cross the finish line without anyone catching up.

I place fifth in M40, very happy with the results under the circumstances.

This table shows my position during the race:

Total standings for the cup after the last race: I'm in fourth place: 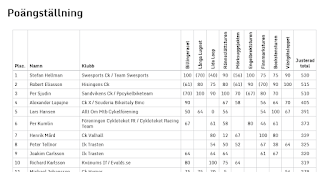 Posted by Alexander Lapajne at 16:10