Rain has been pouring down since 05:00 this morning and thunder is cracking.

(The organizers have decided to push the start to 12:00 at the earliest and the stage will be shortened)


Third place in Beskidy Trophy 2018. This is good!

Started out a bit quicker today than yesterday. Legs felt good, and the rest as well. Personal bests on pretty much all the climbs.

Also I grew some balls during the night and went harder on the downhills as well. That was nice.

The real fun thing that happened during today's stage was actually that I made a new friend: Martin Fus from the Czech Republic. He was on my wheel from the first climb and then we kept company throughout the stage, even waiting for one another during feed station stops. 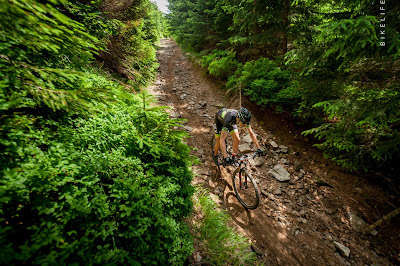 The bad thing today was a new section they had added to the stage: It sucked! The track was covered by fallen trees which were chest high. One had to first lift the bike over them and then crawl over oneself. It was tedious and boring and not what I consider mountain biking. The new trails were also ruined by the rain and had turned into knee-deep mud in places. And as this was all towards the end of the longest stage it was rather tedious. 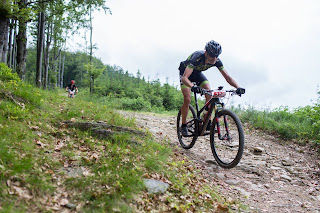 I felt strong towards the end of the stage and got a really nice climb up the last hill averaging 270 watts.

The situation before the last stage is: I've dropped to third place overall and I'm 2 minutes behind the second placed guy. I am however 13 minutes ahead of the guy in fourth place. 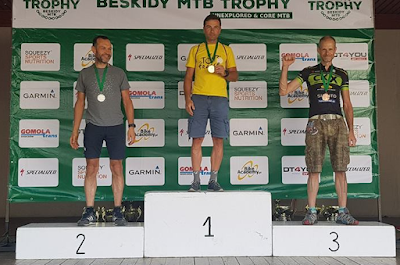 
Some servicing between stage 2 and 3:

Oh, and this is the kit that I carry:

Rain was forecast for today but the stage started in beautiful sunshine and 28 degree heat again. I had a good margin on my competitors with Pawel Gaca in third placed being 11 minutes behind me. So I decided to play it safe today. I started out slowly going up the first few climbs saving my strength for the long climb halfway through the stage

Once we got to the long climb I stepped it up a gear and it felt like I was going quite quickly. The climb takes 1.5 hours from bottom to top. But checking my Strava stats afterwards I actually went a minute slower than last year. Also on the early climbs of the stage I was a bit slower compared to last year.

Then, at 12 o'clock, just as I was going steeply downhill from the big hill everything got dark. So dark that I had to take off my sunglasses because I couldn't see the trails. Then thunder started to roll and I could hear lightning strikes close by. And then... it started POURING. Temperatures dropped from 28 to 8 degrees Celsius. I started shivering as I was drenched by the rain. Instead of going down trails I was going through streams of gushing water... And then uphill the same way. Conditions got very treacherous and I decided to slow down in order no to crash. Other cyclists went by me at breakneck speeds.

Once we got back to the valley the sun came out again and conditions were dry. I went all-in for the last 20 km of the stage. All Strava section from halfway through the stage I did personal bests.

Through the finish line in fourth place. A long way down on first place (Szymon Zacharski). I also lost 8 minutes in the overall standings to Pawel Gaca in third placed but I'm still in second place three minutes ahead of him.

The stage started with a shorter climb... When I say shorter I mean for Beskidy conditions. It took 15 minutes to get over. About halfway through the climb, when I see my heart rate go over 180, I let go of the leading group of about 20 (mostly young) riders. I still catch about five of them before the end of the climb. Things feel good. Averaged 321W over that first climb.

The next descent is tricky and I play it safe and all goes well. Next up is the second 'short' climb... Taking it easy because there's a huge climb about halfway through the stage... Better save energy for that.

There's quite a long asphalt road section leading up to the big climb and I am incredibly lucky to come into this section with a group of four riders. We each take turns team-time-trial-style and keep really good speed.

As the long climb starts I take the lead of our group of five riders. I like it up at the front of a group because I get to keep my own good and steady speed. That is my strength: I can keep a perfectly even and steady pace going over a long climb. Towards the end of this climb one tiny little guy from our group sprints ahead of me. He doesn't get that far ahead though as I see him just some 30 meters ahead of me all the way up. The other three guys lose touch with me and drop off the back.

I have a single 900ml bottle of sports drink with me and I don't need a refill until the second food station (there are three all in all). I stop briefly and the staff refill it for me. Shortly after this I have one of two crashes on the stage. I have no idea what it was but my front wheel gets caught on something and I fly over the handlebars. No damage done to me or the bike however and I'm back on the bike again. I crash again on a steep descent a bit later when the small strip of dirt that I ride on (with a ditch on either side) gets so narrow that I have to bail. Nothing more serious than that I lie down on my side. Otherwise the descents go really well.

I cross the finish line and get the information that I've placed 16th overall. I realize this is a good result as I've on previous years placed at best 28th overall. I have to wait several hours however before they update the results that show I'm come in second place in M40.

Szymon Zacharski in first place came in 3 minutes ahead of me and  Pawel Gaca, in third place, was 11 minutes behind me. 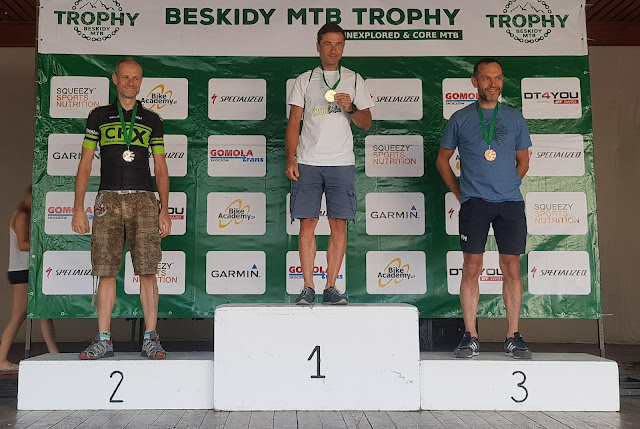