Billingeracet - A series of unfortunate events


Going up the final climb (Thanks Fredrik!) 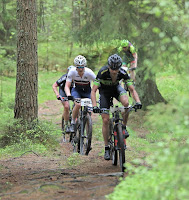 Billingeracet is my favorite race in the Swedish Marathon Cup. I've had my best result here ever with a second place two years ago in 2016. It's hilly and, for a marathon, technical.

It was unclear up until the race start what the conditions were going to be like this year. It had been dry for many days before the race but on the night before A LOT of rain fell. The organizers were talking about changing the starting climb, which usually turns from paved road to singletrack halfway up. The proposal was to have it go up all the way to the top on asphalt instead because the singletrack part was in rather poor condition after of all the rain. At the last minute they decided not to change it. This turned out okay for us top riders but I heard that further down the field everyone had to get off their bikes and walk up this part.

The rest of the track ended up having lots of muddy sections and also slippery stones and roots. Not my favorite kind of conditions as I tend to get clumsy, insecure and cowardly about crashing. I had decided on racing on my most 'racy' tires: Rocket Ron 2.1" up front and Thunder Burt 2.1" in the back. Now, afterwards, I think that may have not been the best decision. Rocket Ron 2.25" up front and Rocket Ron 2.1" in the rear would have been better... which in fact is what I had on the wheelset before I decided to change the tires out a few days before the race...

I had been relegated to start group 2 this year in the Marathon Cup as I didn't really have any good results last year. This makes the starting procedure a bit more difficult: Start group 2 is big and being at the front of it is a good idea. I decided on a quick warmup and then to throw my bike in at the top of the group just as soon it opened 30 minutes before the start. This turned out really nicely: The short warmup didn't affect my performance negatively.

In the last two races that I did (XCup #1 and Hotcup #2)  in the previous couple of weeks I had big problems in the start: I just couldn't get my intensity and heart rate up and got left behind in the starting climbs of both races. Once I had my steam up the races felt pretty good (not great though). It was as if I was lacking VO2max but the FTP was good.

I was worried for the huge starting climb of today's race: Was I going to be dropped behind again? I need not have worried: The starting climb went excellently. In fact I had a personal best on the asphalt portion of it: The power data said I had averaged 406W during the almost 3 minutes that it took. I was well up with the front runners at the top of the climb and things felt good.

We got a good group going just after the first climb. Daniel Grass was there (H40 guy who finished 3rd today) and the amazing Stefan Carlsson came up from behind and started pulling us along. At the first downhill section which has a lot of slippery stones Daniel crashed just ahead of me, forcing me offline and causing me to have my own minor crash. My bottle fell out of the cage and I had to stop to pick it up. Daniel got on his bike quickly and at breakneck speeds started to chase down the other guys. I was a bit more careful (as I always am) for the rest of the downhill and lost the group.

A new group formed and things were going okay... I was losing some positions in the slippery and tricky conditions but it wasn't going too badly.

Öglundabacken - Moving up the field on the climb

As we came to the  middle climb, Öglundabacken, I had lost a few places and decided I needed to sprint up here. A funny thing happened here: The climb is about 4 minutes long and I always try to pace myself on these kinds of climbs. Even and sustained power all the way up wins the day. However in the first few seconds of the climb a young guy comes racing past me standing up on his bike and sprinting up the hill. Two thoughts go through my head: 1. Am I going that slowly?? 2. Does this guy know how long this climb is?? It turned out that number 2 was true. After about 30 seconds I catch him and drop him for dead. Towards the end of the climb I've almost caught up with a group of four riders ahead of me. The climb is however followed by a section of gravel road and I'm able to sprint up to the group - Legs feel great!! I end up averaging 342W on the 4 minute climb, 6 seconds down on my personal best for the climb.

Just after the climb follows a longer section of gravel road and then some asphalt, and then back on gravel road until the halfway point of the race is reached. Quick section in other words. Here I'm riding with my group of four guys and I see another group of four riders perhaps 200-300 meters ahead. I decide that we have to catch these guys: I start talking to the guys and urging them to pick up the speed. When It take my turn at the front we get closer but with the other guys pulling were just keeping the distance. When I take my second turn at the front I decide on being a bit spontaneous and crazy: I'm going to sprint up to the next group. As I start sprinting I look down at my power meter and see that I'm briefly above 700W! This is on flat asphalt road. After a few seconds I look behind and see that I've dropped my group. After another few minutes, just before the halfway point of the race, I've joined the other group. I feel great! BUT I know that this has taken a lot of effort and that I now need to conserve my energy so I ride strategically at the back of this new group.

Poor shifting on the rear derailleur

During the Öglundabacken climb I had noticed that my shifting had gotten really bad: The chain was skipping on the cogs and I had a lot of trouble finding a gear that I could maintain without the chain dropping up or down a cog. It was very annoying and really disturbed me. Now, afterwards, I know that I at an early stage of the race felt someone bump into my bike from behind: I wonder if they perhaps struck my rear derailleur and bent the derailleur hanger. The shifting problems got gradually worse during the race.

Going out on the second half of the race I felt really lucky to be with this new four man group. Cooperation was good and everyone was pulling hard on the gravel road sections. Pace was also high on the singletack where I had to hang on for dear life. This still went surprisingly well, in spite of all the slippery roots and stones, and I started to relax... until... I was going across a "spång". I don't know if there's a english word for this but it's a low plank bridge, this one consisting of three planks. I was on the Spång and thinking: "I usually hate these but I'm doing okay"... and then I drop off the spång and crash off the bike. It's a minor thing but I lose valuable sections on the group. I try to chase them down for a while but they're just going really quickly and I know that I can't repeat the effort that I did before... my legs just don't have another of those sprints in them. After a few minutes of trying to catch them I decide to look behind and see that my old group isn't all that far behind: I decide to make the strategic decision to allow them to catch up.

Last part before the finish

Next followed some tricky singletrack where I unfortunately had to let a couple of cyclists go but ended up somewhere in the middle of my group. The, just as the last climb was approaching, and old friend of mine, Lars Hansen, caught up from behind. He went past my group and upped the pace: I immediately got on his wheel and to my surprise was able to accelerate while the rest of the group got dropped. This felt really good until... yeah, the gears really messed up and the chain dropped between the biggest cog and the spokes of the wheel. I had to get off the bike and pry it out, all this while the cyclists that I had dropped past by me. Very disheartening.

Still, I got back on my back and started pushing hard up "Strupen", the final long climb. I had to catch up with the guys who had overtaken my when I had had my mechanical issues. I actually managed to overtake 2-3 of them, including one M40 guy. All during this my chain is skipping like crazy on the rear cogs and I have trouble holding gears.

I end up going over the finish line in 9th place.

Average power during the race was 239W... about as expected for a three hour race. Heart rate perhaps a bit low. 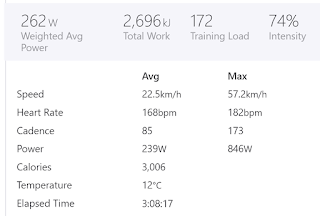 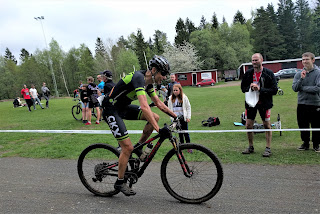 Things are looking good ahead of Beskidy

So Beskidy Trophy, the big stage race in Poland, is coming up in less than three weeks. While today's ninth place is a bit disappointing the current form is great. That makes me feel positive about a good outcome in Poland. My form is improving and weight is going down. I need to continue this trend and try not to drop back down in my "overtraining hole"
Posted by Alexander Lapajne at 05:09