This XCup race (the second one) took place on one of my favorite tracks in Ängelholm. This track is very flowy and quick. However some news section had been added which were really twisty and slow.

I started the race not as aggressively as I perhaps would normally as the track only has a flat starting loop on gravel roads, ie no starting hill. It gets rather hectic as we bear down the gravel roads at 50km/h with a few 90-degree turns mixed in. WHen we turned left into the first singletrack part I was perhaps in 20th place. As people ahead of me started braking for the 90-degree turn that led into the path that slowing down was amplified backwards through the field and I heard people locking up their brakes behind me and then some sort of a crash or contact between riders.

I made it into the singletrack unscathed but just a few hundred meters further on there was a crash just ahead of me when someone managed to get stuck on a tree. I waited patiently for a few seconds before I could continue.

From here on I started advancing through the field until I finanlly caught up with my young prodigy Jakob Håkansson (I passed him as he just seemed to have had a small crash) and then, towards the end of the lap, also passed Martin Wenhov.

Going out on the second lap I noticed that I had quite a few cyclists behind me on my wheel. A few that I could identify were JakobH, MartinW and Krisitan Skoglund. I kept up the quick pace for another lap. Then Jakob and I started switching with him pulling on the gravel roads stretches and then letting me pull on the singletrack. This was a lot of fun and very efficient as well.

We started catching up with guys who had not been affected by the early crash. We overtook Jakob Gawlik, who was taking it easy after having a crash of his own.

Going out on the third lap things were pretty much unchanged in the group. We caught and passed Ola Hallberg who had been riding with Stefan Methander but had had to let go of his wheel. We did see Stefan Methander far ahead on the gravel road stretches. It was unclear whether this third lap would pass within the 1 hour time limit or if we would have to go out for a fourth one.

Towards the end of the lap MartinW went around me and increased speed... I got the impression that he thought this was going to be the last lap. My calculations, however, told me that there would be a fourth so I didn't try to follow. As we ended the lap there were still 2 minutes left so a fourth lap it was.

On this fourth and last lap, all of a sudden, MartinW came around me again, from behind. I didn't understand how he first could be ahead of me and then all of a sudden behind. I'm guessing that he must've stopped after the third lap and thought it was the end of the race. Now it was just me, Jakob and Martin left in the group and we were catching Stefan Methander quickly. With just a couple of kilometers left we came up on Stefans wheel right towards the end of a gravel straight. I was last in the group and decided that this was where I needed to make my move: So I sprinted around all three riders and went for broke knowing that there were few opportunites to overtake in the last few kilometers.

Things went well from the start but just in the last couple of hundred meters I was passed by both Martin and then Jakob. I finished ninth but with a great feeling. Good race!

One notable thing about this race is my max heart rate. My Garmin recorded a maximum of 200pbm. Now heart rate monitors sometimes have glitches... But if you have a look at the graph below you can see that there were several heart beats recorded in the range between 190 and 200. Weird! 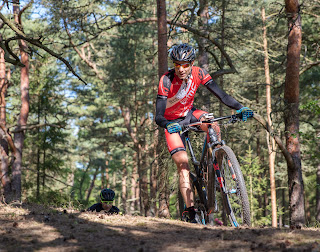 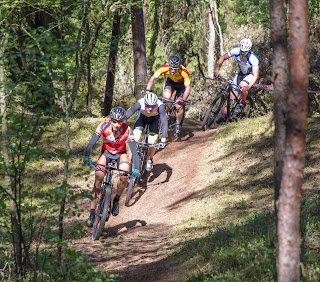 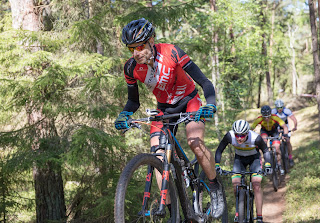 Posted by Alexander Lapajne at 21:44