Långa Lugnet is the second race of the Swedish Marathon Cup and one of the races that we need to travel the furthest to get to. Roughly 600 km of driving was required. Obviously this means that we stay overnight.

The weather was good, actually quite warm, and the terrain was very dry which led to dusty tracks. This course is 62 km and consists of three loops. There is a starting climb, which you know that I love. The single track has plenty of roots and rocks.

I had taken a chance on using my super light Xpedo M-Force 8 Ti pedals. These weight quite a lot less that normal Shimano XTR pedals. But they have one main drawback: They're hard to click into. You need to have the cleat perfectly positioned exactly on top of the pedal, and then click into it. I've used the pedals on and off for the past two years, mainly on courses where I know I don't need to click out of the pedals too often. It had been a while since I'd used them but I had newly lubed them up before this race and tried them on short ride.

The race started and... well, I failed to click into the left pedal... It took a couple of hundred meters before both feet were attached and by then I had lost A LOT of places. I start in box 1 and by the time I was clicked in I was probably in box 4 (the last one). I know how to click into the pedals but the stressed out situation at the start just means that I guess I panicked.

When the pedal trouble had sorted itself out I started sprinting up the hill, advancing through the field. This worked fine, except for the fact that I got real tired. As we got to the gravel roads I started sprinting from group to group. Again, this also worked, but I expended a lot of energy doing it. After a while I managed to join a group which had Stefan Hellman in it. I started to relax a little but the pace was really high so I couldn't recuperate from my exertion. Also, I never quite got into the "groove"... I kept getting small gaps to the rider in front of me and had to sprint to close them.

The first loop ended in a man made downhill section with berms and banked turns. I am a lot of better at this kind of trails than I used to be but on this course the dry weather meant that the turns were on lose gravel and I just didn't know how much I could trust the grip. I lost ground, the group split up, and Stefan Hellman and a few riders went ahead. I was left with a smaller group behind.

As we started the second loop I looked down on my bike computer and saw that my average heart rate was at 176 bpm. This not event halfway through the race. I realized that I was never going to be able to keep this kind of intensity up for another 1.5 hours. I needed to take it a bit slower or I would hit a wall towards the end of the race. The current group still kept a good pace, not as high as when Stefan Hellman was leading us, but it was going well.

Towards the end of the loop, on a section were there had previously been some mud, my front wheel stuck in a deep hole and I went over my handlebars. I was at the front of a small group of perhaps 5-6 riders at this point and as I picked myself off the group I noticed that Daniel Grass went past me - I didn't even know he had been part of the group (he later told me that he had caught up from behind). I quickly got back on the bike and started judging my chances to catch back up with them - they were perhaps 50 meters ahead of me.

I decided to give it a shot and went all in. In a quick and rocky downhill section I didn't break much and was able to rejoin the group.

The Third and Last Loop

The last loop has lots of flowing up and downhills and ends with another man made downhill section. At this point there were just four of us left, Daniel Grass (M40), me and two Elite guys. I was getting really tired and was not sure how long I was going to be able to hang onto this group. At the second to last climb I let them go and concentrated on not being caught by anyone else.

Oh, in case you're wondering I ended the race with an average heart rate of 174 bpm. 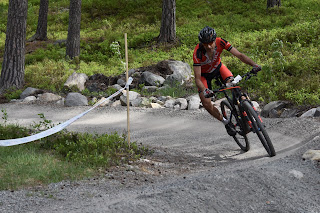 Posted by Alexander Lapajne at 15:24